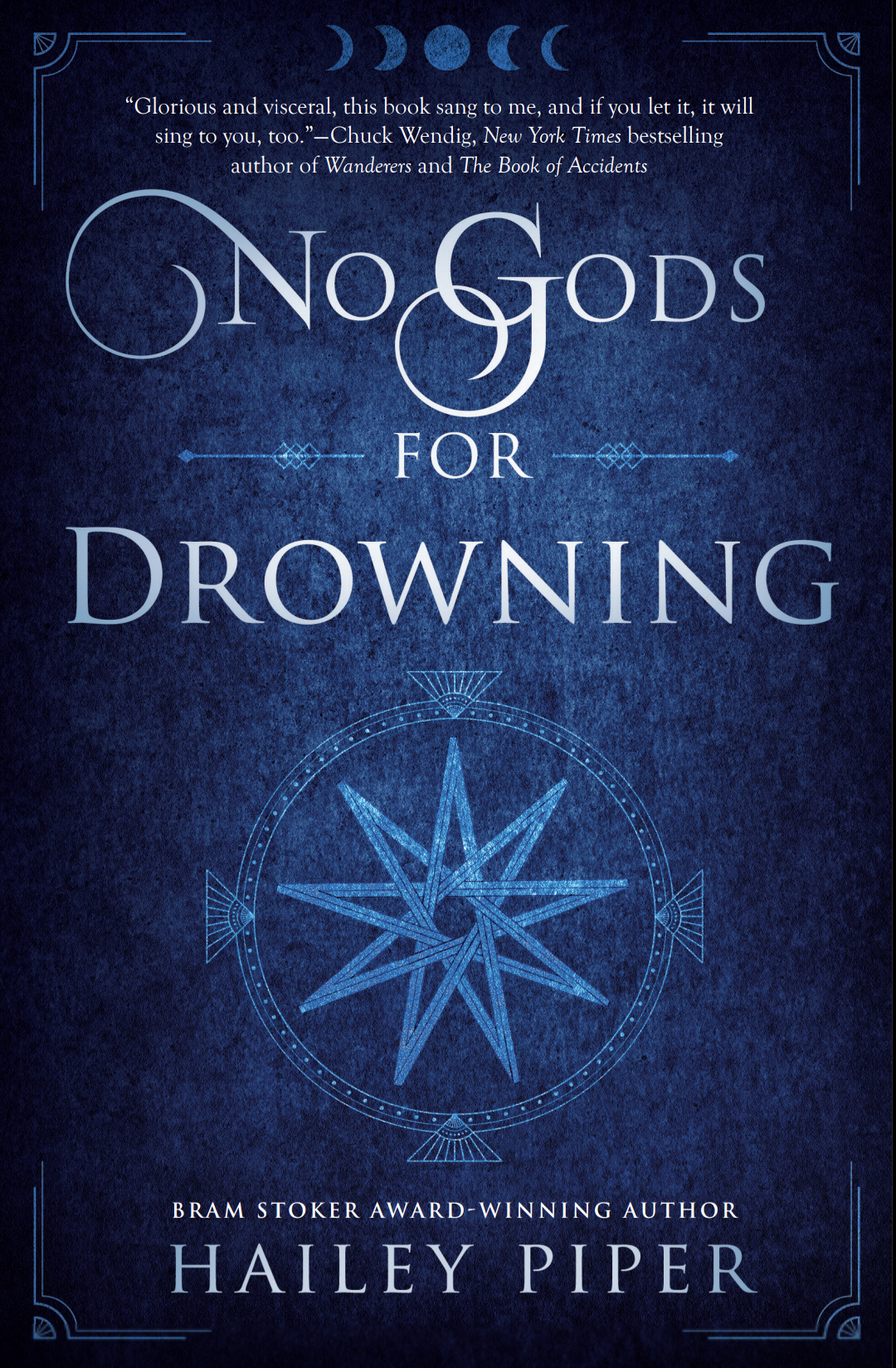 So excited to finally say this, but my second novel No Gods for Drowning has been unleashed by Polis Books! This book has been growing little by little inside me over decades; to have it out in the world at last feels like mountains have shifted within. Horror, noir, and dark fantasy collide in a story of sea monsters, killers, detectives, and blood gods. You can read more below, and check it out wherever books are sold!

_____
IN THE BEGINNING, MAN WAS PREY. IN THE END, THEY’LL BE PREY AGAIN.
The old gods have fled, and the monsters they had kept at bay for centuries now threaten to drown the city of Valentine, hunting mankind as in ancient times. In the midst of the chaos, a serial killer has begun ritually sacrificing victims, their bodies strewn throughout the city.
Lilac Antonis wants to stop the impending destruction of her city by summoning her mother, a blood god—even if she has to slit a few throats to do it. But evading her lover Arcadia and her friends means sneaking, lying, and even spilling the blood of people she loves.
Alex and Cecil of Ace Investigations have been tasked with hunting down the killer, but as they close in—not knowing they’re hunting their close friend Lilac—the detectives realize the gods may not have left willingly.
As flooding drags this city of cars and neon screaming into the jaws of sea demons and Arcadia struggles to save the people as captain of the evacuation team, Lilac’s ritual killings at last bear fruit, only to reveal her as a small piece in a larger plan. The gods’ protection costs far more than anyone has ever known, and Alex and Cecil are running out of time to discover the true culprit behind the gods’ disappearance before an ancient divine murder plot destroys them all.
NO GODS FOR DROWNING is part hunt for a serial killer, part noir detective story, and unlike anything you’ve ever read before.
“Glorious and visceral, No Gods For Drowning drips with evocative prose and proves Hailey Piper to be a storyteller with wonderfully sharp teeth. This book sang to me, and if you let it, it will sing to you, too.” – Chuck Wendig, New York Times bestselling author of Wanderers and The Book of Accidents
“Wrathful gods, drowning cities, and an ancient, bloody mystery—Piper’s novel had me from the jump. No Gods For Drowning is a superior offering.” – Laird Barron, author of Swift to Chase
“Piper, a rising star in horror, is announcing her intentions to break through onto a larger stage with this confident and compelling tale that is as fun as it is thought-provoking.” – Library Journal
“A roller coaster of tension! I was desperate to read on, yet terrified. A truly addictive read.” – Hannah Lynn, award-winning author of Athena’s Child
“Incredibly atmospheric detective horror. This mythology is now resident in my brain.” – Maya Deane, author of Wrath Goddess Sing
“Strange and wonderful … Look, if I have to put on a ceremonial robe and make a sacrifice to Hailey Piper to get more books like this, so be it.” – Dea Poirier, author of The Girls in the Fire

Two podcasts went up today where I had the pleasure of talking about my upcoming novel No Gods for Drowning!

Over at Queer Writers of Crime, we discussed the book against how horror and crime often walk the same roads and where they split. If you check the blog post there too, I give a little writing advice (or maybe anti-advice; you decide).

Over at Talking Scared, we explored some of the book’s themes, and then we chatted a little about Your Mind Is a Terrible Thing and its psychological space horror too.

I’m been on the verge of bursting to share this news, and now it’s finally out! I’m beyond thrilled to share that Titan Books will be publishing a new novel by me in 2023, A Light Most Hateful. It’s a tale of catastrophe striking a small town, testing the bonds of friendship, and straining at reality itself.

We have No Gods for Drowning releasing from Polis Books in about a month, and the next year is quite busy with Cruel Angels Past Sundown releasing in the first quarter, followed later by Even the Worm Will Turn (sequel to The Worm and His Kings) and now A Light Most Hateful. It’s going to be an exciting time, so keep an eye out for further updates!

I’m tremendously excited to announce that my 2020 queer cosmic horror novella The Worm and His Kings will be getting two sequels, each published by Off Limits Press, forming a cosmic horror trilogy of novellas! 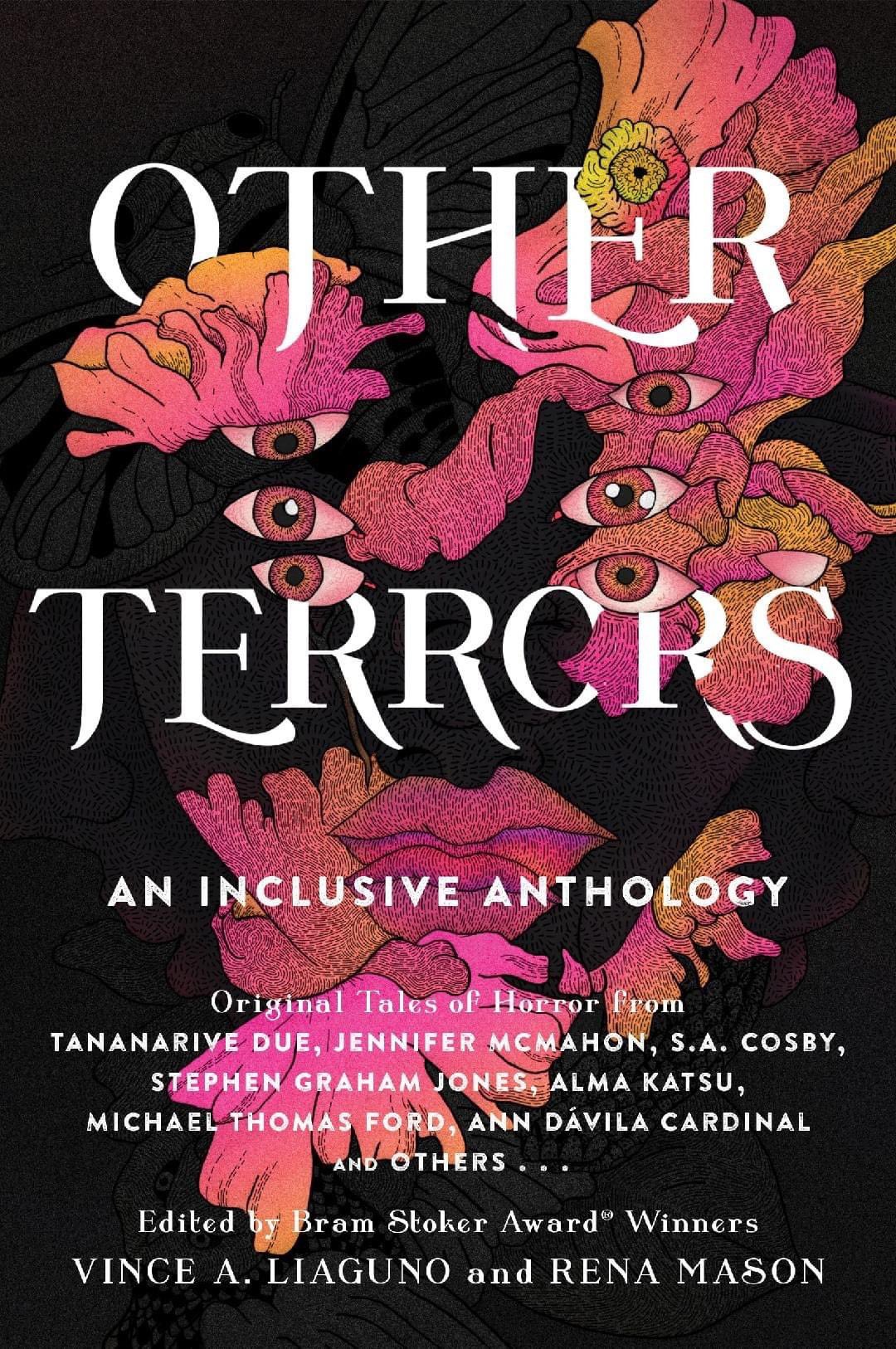 New story day! I’m proud to see my coming-of-age body horror story “The Turning” in Other Terrors, edited by Bram Stoker Award winners Rena Mason and Vince Liaguno, which features 24 stories by some of the biggest names in horror. My story tells of a mysterious change spreading through adolescents across the world. It takes nine weeks to turn, and you’ll never be the same.

Check it out everywhere books are sold! 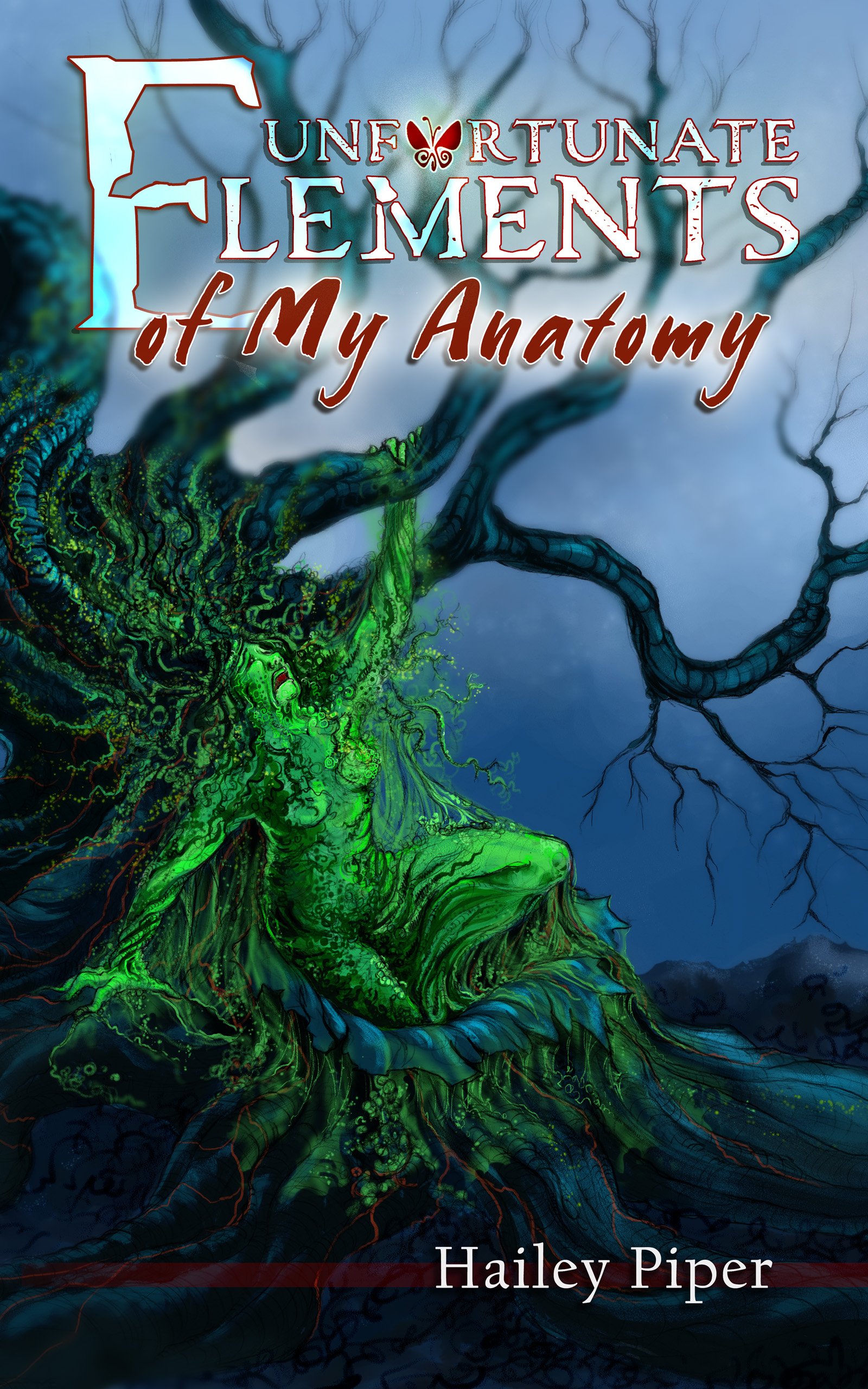 Ecstatic to share that Unfortunate Elements of My Anatomy, published in May 2021 by The Seventh Terrace, has won the Ladies of Horror Fiction Award for Best Collection 2021. There was a tie this year, and I’m proud for my collection to be a co-winner with Isabel Yap’s Never Have I Ever. 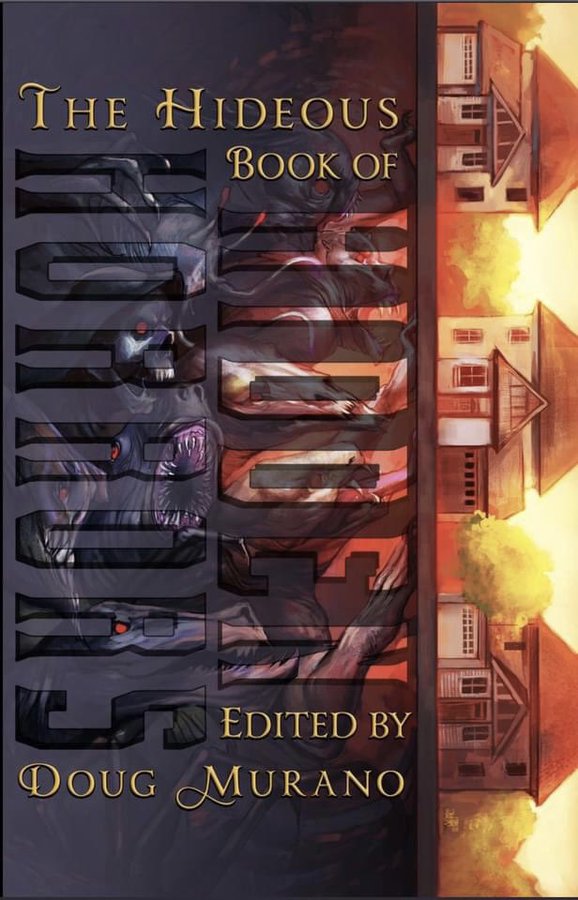 Late into June, I have two new stories out!

The first is a new novelette, “When I Catch You,” about a woman being followed, the ghost of an ex-lover, and the mystery of eyes in the dark. You can find it alongside stories by over a dozen incredible authors in The Hideous Book of Hidden Horrors, the first publication of Bad Hand Books. Check it out at Barnes & Noble.

I’m also appearing in the new Crystal Lake Publishing anthology Shakespeare Unleashed. The book itself won’t be out until 2023, but my Hamlet-inspired short story has been put up online for free as a teaser.  Check out “A Soliloquy of Tongues” here.

Things have been true chaos of late, between novel edits and short story work and the world, so I’m a little behind on site news. Here’s a wonderful piece: after many, many requests, my Bram Stoker Award-winning novel Queen of Teeth will finally be coming to audio! Expect a production and release from Tantor Audio in the future, with the sci-fi horror romance vagina monster story of Yaya, Doc, and Magenta nipping at your ears. 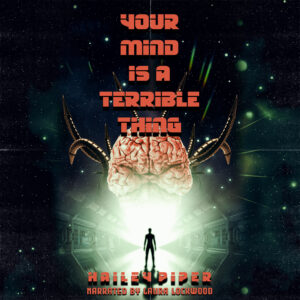 It’s early, but the audiobook for my new space horror novella Your Mind Is a Terrible Thing is out! Find it on Libro.FM + Audible + other sites! Laura Lockwood gives a stellar narration following the plight of Alto, Esme, and Zelany against the horrors on the M.G. Yellowjacket.

Proud to share that I’m not represented by Lane Heymont of The Tobias Literary Agency. I’m excited for what lies ahead!

Also, since I won a Stoker and lost a bet with my wife, I had to make a deleted scene from Queen of Teeth public. Thankfully Tor Nightfire was happy to host, so check out Yaya Betancourt Dreams of Teeth (Or, How to Kill a Toothy Darling).

So something pretty cool happened this weekend: 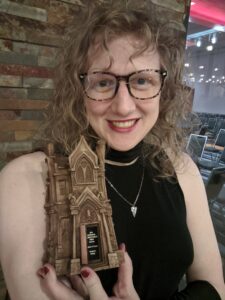 At StokerCon 2022, members of the Horror Writers Association honored myself and Queen of Teeth with the Bram Stoker Award for Superior Achievement in a First Novel. 2021 was an incredible year for horror, easy to tell both by the ballot and outside it, and every novel nominated beside this one was an outstanding piece of horror. I’m honored to have stood with them and to have received this beautiful award, and I’m grateful to every reader who’s let this weird love story wind its tentacles around them. Thank you.

I can confirm at last that the award is not made of chocolate.

I also have a new story out as of last week, “In Thrall to This Good Earth,” part of the absolutely gorgeous Howls from the Dark Ages anthology of medieval horror. It’s a stellar table of contents and I’m joyful to be part of it.