a light most hateful

Overjoyed to see Paste has included A Light Most Hateful in its “Most Anticipated Horror Books of 2023.” From the article:

“Hailey Piper might be the reigning queen of great horror titles, and now the author of Queen of Teeth and No Gods for Drowning is back with yet another instantly compelling new book.

Set in a quiet Pennsylvania town, A Light Most Hateful follows a young runaway who must reckon with her own past even as a massive storm washes a monster into her community, enslaving the locals and leaving her fighting to survive. A great title, a great concept, and Piper’s elegant prose all in one package. Sign us up.”

This year is going to be quite a beast for the genre. I’ve read a couple of the titles here already and they’re fantastic. A Light Most Hateful releases October 10, 2023 from Titan Books.

And glancing back to last year, it’s very cool to see space horror tale Your Mind Is a Terrible Thing on The Line-Up’s “Best Horror Novellas of 2022.” From the article:

“A spectacular story that delves deep into anxiety and isolation through sublime body horror while weaving an intense mystery that crawls under your skin and into your brain.”

As things move ahead with A Light Most Hateful, I’ve added a page for it including release date and plot details. I’ll add cover art once that’s been revealed, but for now I’m happy to share the release date!

A Light Most Hateful will release on October 10, 2023 from Titan Books! Pre-order in paperback/ebook at Barnes & Noble and Amazon

I’ll share more on that, and other upcoming 2023 releases (Cruel Angels Past Sundown and Even the Worm Will Turn) once they’re public.

And one more piece of news: my first novella The Possession of Natalie Glasgow went out of print last year. I’m delighted to share its new publisher has been announced. Rooster Republic will be re-releasing this tale of possession and witchcraft in 2024, as both a limited edition hardcover and later in paperback. It was a joy to work with them on Queen of Teeth and I couldn’t be happier we’re working together again. The hardcover pre-order should be up late this year, so stay tuned! 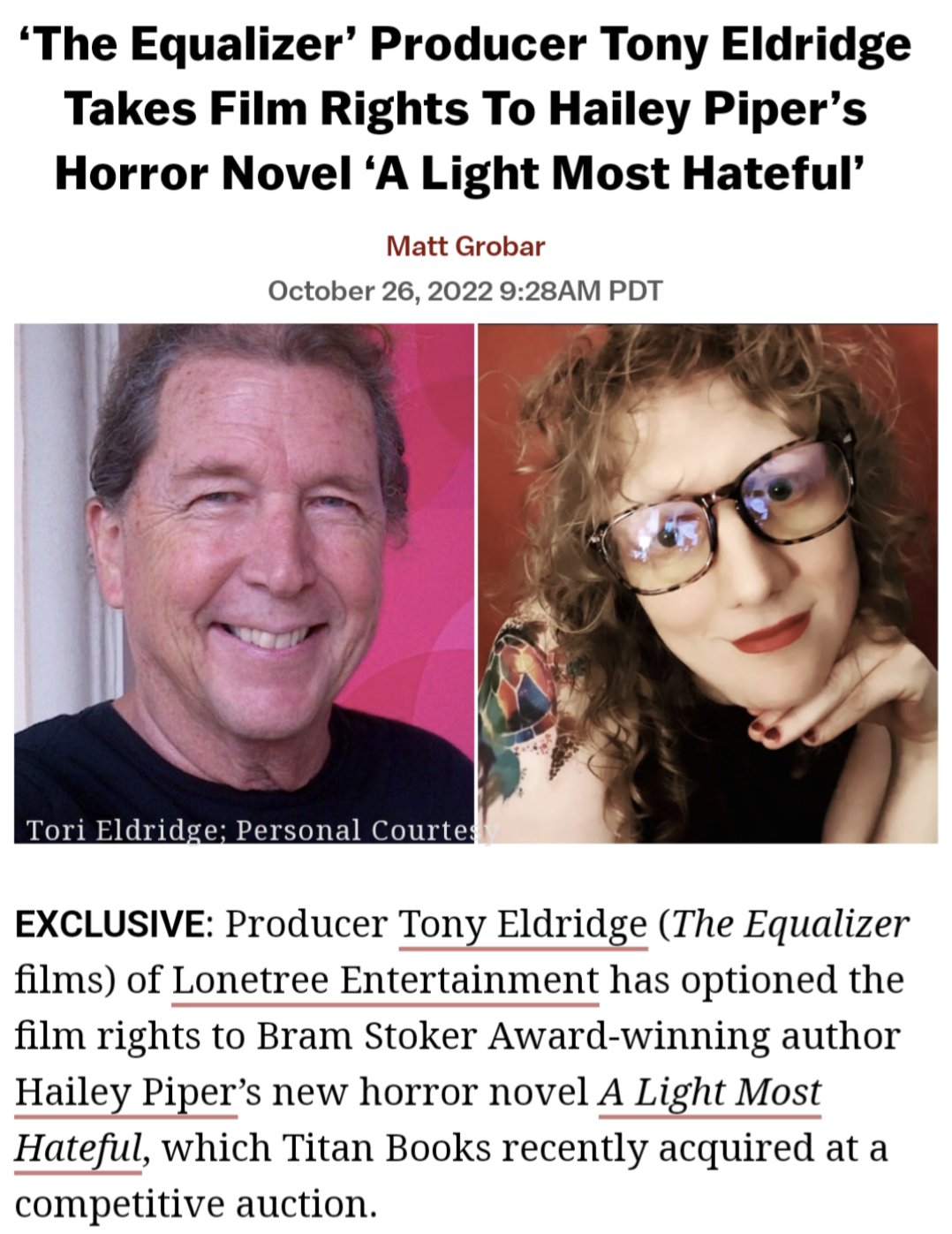 I’m so pleased to share that my upcoming 2023 novel from Titan Books, A Light Most Hateful, has been picked up by producer Tony Eldridge and Lonetree Entertainment for film adaptation!

From the Deadline article:

“A Light Most Hateful is billed as a terrifying survival horror full of haunting friendships in which the female experience turns monstrous. The story focuses on Olivia, who having fled home three years prior is stuck in a dead-end job in nowhere Chapel Hill, PA with her best friend Sunflower. That’s until a night storm crashes into town with a mind-bending monster in tow. If Olivia’s going to survive the night to someday reconcile with her parents, she needs to dodge residents enslaved by the storm’s otherworldly powers and find Sunflower. But as the night strains friendships and reality itself, Olivia suspects the storm, and its monster, may have more to do with Sunflower than anything else.”

A Light Most Hateful releases from Titan Books late next year. I’ll keep things up to date on both book and movie news as allowed, but in both cases, it’s an exciting time!

On the publishing side, I have a new story out, “The Deep End of You,” which is about the most unique soul in the world–yours!–and how it can be captured, in art and in other ways. Check it out in Stories of the Eye from Weirdpunk Books!

I’m been on the verge of bursting to share this news, and now it’s finally out! I’m beyond thrilled to share that Titan Books will be publishing a new novel by me in 2023, A Light Most Hateful. It’s a tale of catastrophe striking a small town, testing the bonds of friendship, and straining at reality itself.

We have No Gods for Drowning releasing from Polis Books in about a month, and the next year is quite busy with Cruel Angels Past Sundown releasing in the first quarter, followed later by Even the Worm Will Turn (sequel to The Worm and His Kings) and now A Light Most Hateful. It’s going to be an exciting time, so keep an eye out for further updates!